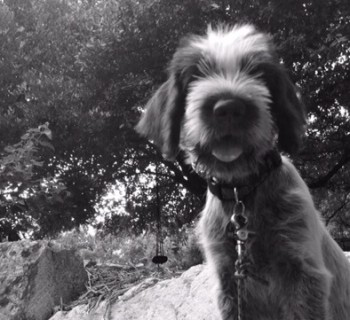 How I stopped worrying and learned to Love training the puppy…

As a dog trainer, and a damned good one at that, I had an interesting project this year. A very good client of mine hired me to find a certain type of puppy for them which I did. The only problem was that the puppy was going to be available 2 days after this client was leaving on vacation for three months. No problem, we agreed, I would keep this little guy and train and raise him like he was my own until they get back from vacation. This is DEFINITELY something I would do if I could afford it myself. I mean, someone else potty training your puppy for you! Crate training! Oh yeah, sign me up NOW! Here is the check.

I’ve raised puppies before and I’ve board and trained dogs many times, but this long term board and train of a brand new puppy is something a bit….shall we say, different, it’s neither fish nor fowl. He’s a puppy and he’s living with me as my personal puppy but he isn’t mine. I can’t give him all the leeway he needs to learn things in a timefrarme without a deadline….right?

The connundrum for me as a trainer is that I know this puppy has to be “ready” for his owner when they arrive back in town. He MUST master certain skills and display certain abilities by the day I turn him over to his owner. The problem is, that he is a PUPPY and learns things at his own rate. He’s smart, no question. He learns things fast fast fast, no question. But I’ve had a constant fear that he “won’t be ready” in time to go home. We have a program, a path, a plan, but still….the clock is ticking.

Then, just this week, I realized something. This puppy is what he is. He’s not perfect yet (though he’s better than your puppy I pretty much guarantee you), he doesn’t perform 100% in chaotic situations yet (no dog does ever), and he still chews on shoes if you leave them on the floor in front of him (every puppy will). He’s a puppy. A very well trained, obedient, and well socialized, confident puppy but just a puppy and will absolutely still be one the day I turn him over to his owner.

While fretting out loud about the situation the other day my wife reminded me to deliver a note with this puppy when I turn him over. The note she said should be:

“This is a puppy. If you leave shoes out on the floor he will eat them, and if you play with him for to long before taking him outside to pee, he WILL have an accident in the house.”

That pretty much sums it up. This puppy will heel of leash, come when called quite readily, sit and stay for a reasonable amount of time, go to his place and into his kennel on command, jump up and get off of things on command, back away from something when you tell him to, high five, shake, roll over, play dead, fist bump, retrieve, leave it, and wait on command, wipe his whiskers after he drinks water automatically, but he’s still a puppy and he damned sure will chew up your Manolos if you leave them on the floor in front of him.

I’ve loved this project, and am supremely grateful I’ve gotten paid to raise and train this puppy. Ownership by proxy I suppose one might call it. This is the sort of long term project I would like to do move of in the future. My only worry is how to make people understand that despite the hundreds, or dare I say thousand(s) of hours I spent training him, he’s still a puppy and not a machine. He’s going to eat something valuable at some point. I’m just glad he didn’t go for my wife’s Manolos while he was with us.

Before and after 100 years of selective breeding

I spent quite a bit of time on the phone the last few weeks being interviewed about different dog breeds and what the dog breeding trends are that I see in my day-to-day practice. There’s a lengthy article in the Associated Press, one in the London Times, and a few other places that I’ve been quoted in lately. I find this area of different dog breeds utterly fascinating.

Anytime the subject of dog breeds comes up it elicits great energies from all sectors. After the recent couple of articles I got an enormous amount of hate mail from people around the world comparing me to Dr. Mengle . All of this for just discussing a new hybrid of dog pet is coming on the market. I don’t advocate getting a dog from a breeder versus rescuing a dog at all. All I want for my clients is that they get the best dog for their lifestyle and one that is stable and adds to their life rather than creating enormous amounts of work for them.

With all that being said, my wife pointed out an interesting article she ran across this week. It takes a look at historic pictures of different dog breeds over a century and highlights the changes to those breeds that we have created. If you look at the article the two most striking ones are the German Shepherd in the St. Bernard. Those dogs were both much rangier with far less pronounced angularity than the current breeds. This is just an extreme example of what we’ve done with two different breeds in the last hundred years.

The problems I run into in a day-to-day work as a dog trainer, is that breeders are generally focusing only on the physical appearance of the dog rather than breeding for behavior and personality. This is certainly not the case in every instance, but I see a lot and it worries me. It’s one of the reasons that I spend significant amount of time with my clients helping them pick a reliable breeder with puppies that have stable personalities, and also work with rescue organizations to find dogs with stable personalities.

In any case, take a look at the article I think most of you will find it quite interesting. And it’s great fodder for thought in how we engineer our dogs to look the way that we think they should.

It’s holiday time and around my place that means to much time inside the house.  I’ve got kids at home and a puppy (nine months now, but still a puppy) that needs lots of exercise.  Parental dilemma for sure, or is it?

So, let me think about this for a minute, the puppy needs some cleanup work on his retrieve, return, and hand delivery.  The six year old needs LOTS of time outside the house in the cold to tire her out for an early bed time.  I’ve got a plan.

I ordered these silly retrieve trainers about a month ago that are supposed to help with retrieve issues.  They are nothing really, and I’ve manufactured a similar thing out of found objects many times in my training career.  But, there they were in the catalog and they were relatively inexpensive, so I ordered some.

Basically you shove some treats in this tube and throw it.  The dog has to bring it back to you for you to open it and give him a reward for the retrieve.  Super simple, super easy, super lazy, but it works and it works well.

I pulled one of these out this week and showed my six year old dog training daughter how to use it.  Showed her how to throw it (she’s really good at this part) and showed her how to get the puppy to deliver it to her.  She knows the “out” command for getting Super to release things so we’re good there.

When we went outside yesterday to start work, I tossed the thing about 4 times to make sure Super was in work mode and then my daughter said “can I do it daddy?”  That was all it took.  We were outside for hours over the last couple of days, and man has that puppy gotten a total retrieve workout.  Retrieving from the brush, from the street, from the weeds, from a tree limb, you name it and he’s gone after it.

At the end of the day the puppy is totally exhausted from the work.  He’s tired from the retrieve work fur sure, but it’s all the sits, downs, around, halts and all the other stuff my daughter throws in there while he’s waiting for the next bumper toss. The best part of the whole arrangement though is that Tom Sawyer thing. You know, the part where he gets all the other kids to pain the fence for him.  Yeah, I get to sit there and top off the treat toy every 20 minutes or so, and my six year old does all the hard work.  Now THAT is a dog trainer’s dream come true….tired kids, tired puppy, and I just get to sit back and supervise.

This is how you work on the proper retrieve if you are a six year old dog trainer. 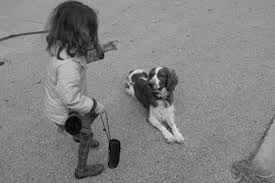 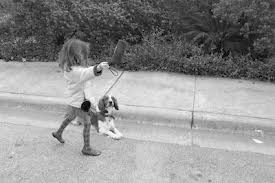 More wind up (she is six after all) 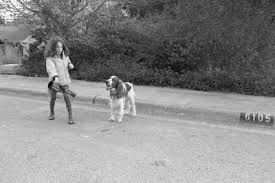 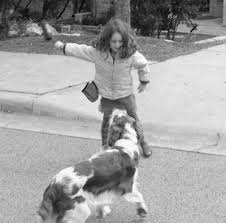 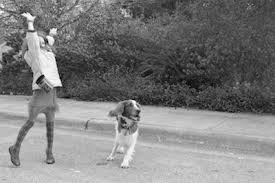 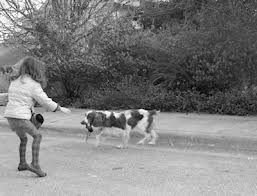 the “Out” command completed and ready to go again 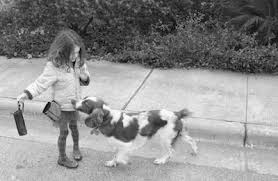 Happy Holidays to us all and get those kids and puppies out in the cold to play.

Well, sometimes I run across a breeder that just blows me away and Linda and Steve Rogers of Timshell Farm is one of the most ethical and professional breeders I deal with.

I’ve had the pleasure of training a number of dogs from Timshell over the past several years and I can say without exception they’ve been amazing pups. Now the quality of the pups is one thing but these guys are CUTE with a capital C. I just got some pictures from her and had to post them. If you’re thinking about getting a doodle I strongly recommend you talk to Linda. 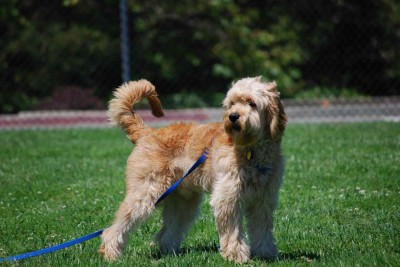 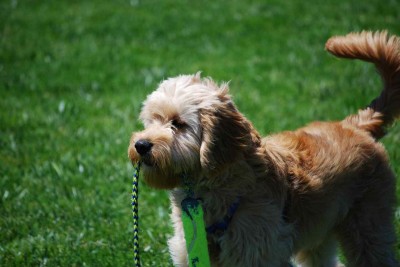 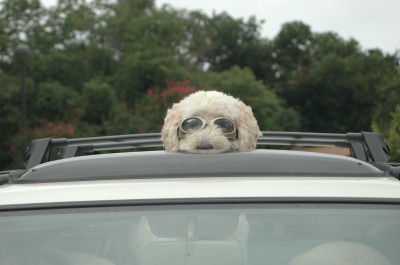 I just finished reading a fantastic small article in the NY Times today. They have an ongoing series on life with a new puppy and today’s installment was on dealing with a dog trainer.

There is absolutely quite a bit of “science” in dog training but there is equally, if not more, “art” to it. A lot of dog training involves being able to communicate with the owners AND the dogs and that’s were things fall apart for most dog trainers. The question of method comes up so often and this wonderful quotation from the article is what I repeat so many times to potential clients on the phone. With due credit to the NY Times here it is:

Shawn Stewart said “No one out there can say that any one method will fit any dog or owner.”

I just love it and it is ever so true.

The article is here and I do recommend you take a look if you have time. Article

Also, if you have the time and want to hear a bit more about my “philosophy” take a look at my previous post “No Guru no Method“.